The Real Forgotten Realms Part 2: What The Realms Isn't

Yes, it took me 20 days to get back to this. This has been quite the busy month, personally.
When people talk about the Forgotten Realms, one of the common criticisms is "having too many high-level NPCs who take all the spotlight and fix all the players' problems for them. Why do the PCs have to slay the evil Lord Malthiir of Mulmaster, why can't Elminster do that with his absurd power level?"
I say that this is common because when I talk about the Realms with people, this is one of the common criticisms that is brought up frequently, from old-school and new-school players, people with all kinds of experience with the setting. I'm not going to dispute that criticism here, because I want to admit something to you instead: it's completely founded in truth.
A short historical aside: the Forgotten Realms were originally created by Ed Greenwood as his home campaign, and were purchased by TSR when TSR needed a new campaign setting for AD&D. They asked Ed because he'd written a lot of very popular Dragon articles about the Realms. Why did TSR need a new campaign setting? Well, at the time, they had two: Greyhawk and Dragonlance. Greyhawk was tied up in legal disputes with Gary Gygax, while Dragonlance had been designed for the very specific Dragonlance modules and novels project. Dragonlance was very successful and sold like crazy, but the things that made it sell well also made it very inflexible. The Forgotten Realms, then, were a new "core" setting for AD&D, where they could put a lot of their other projects and creative properties and tie things together. This began as soon as the very first Forgotten Realms product, which wasn't by Ed Greenwood or part of the "main" Realms: Douglas Niles' Darkwalker on Moonshae was his own Irish-inspired fantasy setting for D&D that got folded into the Forgotten Realms.
Shortly after the Old Grey Box was released, 2e AD&D came out. 2e AD&D introduced a number of story and setting changes to the game, a lot of which were motivated by uneducated fearmongering about D&D (such as the removal of assassins, and the name changes for demons and devils to tanar'ri and baatezu.) Each of TSR's campaign settings, then, had to be updated to fit these changes. And for the Forgotten Realms, TSR decided to take another stab at the multimedia project model Dragonlance had shown sold so well. So, the transition from 1e to 2e for the Forgotten Realms wasn't just a new supplement, it was an Event, a big marketing push with lots of new products. (This model TSR and WotC would return to again and again; collectively these are referred to in the context of the FR as "Realms-Shaking Events", or RSEs.)
And that Event was the Avatar Crisis. The gods all get thrown down from the planes, forced to live as mortals on Toril, and duke it out, rearranging magic and which god controls what and so on. The most prominent/popular event to come from this is the Bhaalspawn of the Baldur's Gate computer games, a nice addition to Bhaal, the god of assassins, dying. Because, you see, Bhaal had to die: he had to die, so all the assassins would die, because assassins weren't appropriate content for 2e AD&D. In other words, the Avatar Crisis is metaplot as fuck. Editorial determined what changes needed to be made, and the authors and designer who wrote the corresponding trilogies of novels and adventures had to follow those changes. (Books 4 and 5 of the Avatar Crisis were published years later as a follow up RSE, hence the official name changing from the Avatar Trilogy to the Avatar Crisis. There's also tie-in comics from DC, but I haven't read those.)
And those modules: well, they're fucking abysmal. 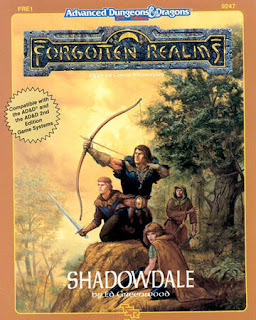 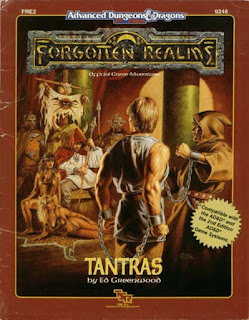 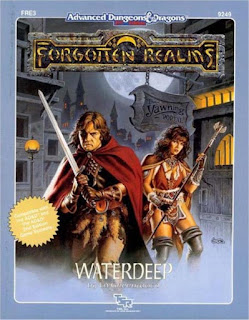 Shadowdale. Tantras. Waterdeep. Honestly, any group that actually completed these should get a fucking medal. These are EXACTLY what people are thinking of when they talk about FR adventures where the NPCs solve all their problems for you, where you're stuck to a railroad where explosions happen and none of your choices matter. Because again, these were metaplot as hell.
These were patterned after the Dragonlance modules, which were also very railroady, but there's an important difference. In the Dragonlance modules, the players play the story-crucial characters (like Goldmoon, the new cleric proving the gods are real) from a pregenerated selection. The novels are really the retellings of the module playtesting, with the various designers and writers breathing life into these characters; the modules allow you to make you their own. The pieces still move on train tracks, but you're the pieces.
The Avatar Crisis modules DON'T have you playing the plot-crucial characters. Instead, you create your own PCs - and then get attached to the plot-crucial characters through increasingly more implausible coincidences and schemes. You find out the same plot as the novels - not by taking part in it, maybe by seeing it. A lot of it is just read out by the DM in boxed text; when the modules bother to actually fill in the PCs on the important things going on. Essentially, the PCs just babysit the actually important characters - Midnight, Cyric, Kelemvor - and have the events happen to them. Affect the outcomes? Take your own choices? Oh, no, definitely not: the metaplot must go on. The PCs get captured, kidnapped, forcibly teleported around, all to make sure they're in the right place for the right event. Worse yet, because the PCs AREN'T the main characters, they never even see or participate in many of the most exciting moments in the actual novels (such as Midnight's journey through the Fugue Plane.) The actual climax to the whole trilogy - a rooftop battle with Myrkul the god of death - is won no matter what the PCs do: if they fail, Midnight and Elminster win for them.
Why do I bring this up, you might ask? If you're trying to convince me the Forgotten Realms are good, why do you confirm all the worst stereotypes first?
If I hide it, then I have to spend a lot of time covering up how bad these are. I'd have to lie, and pretend they don't exist, or justify them in other ways. My argument would be weakened by not addressing crucial disputative evidence.
If you're familiar with the logical structures of arguments, you probably already know what I'm going to say. You can never prove a negative: I can't say that the Forgotten Realms are never bad. But I can prove a positive: I can show you how the Forgotten Realms are good, and interesting, and prove THAT.
See, that's the secret, and it always has been, ever since the Old Grey Box in 1987: you've always been told to use what you'd like, and throw out what you don't. Make the Realms your own. I can't account for every product ever, and to be honest, there are a fair portion of terrible ones out there. I can show you the good ones, and why they're good, and teach you how to make the setting your own and make the Realms work for you.
One last thing. Remember how I said there were multiple novelists for the Avatar Crisis, but only one designer? It's true. All three of those horrible modules were written by Ed Greenwood. Next time we'll talk about what the Forgotten Realms is, by showing you how Ed really sets up games when he's not forced to write to a metaplot. And I promise it won't take as long.
Posted by Arivia at 11:43 AM